This paper presents the development of the conceptual design of a coastal Patrol vessel with the capacity to receive and deploy a helicopter, in order to increase the efficiency of coastguard operations developed by the Colombian National Navy. As a starting point, the design of the coastal patrol vessel built by Cotecmar and named CPV46 was taken, on which modifications were implemented in its main dimensions and distribution of spaces, which allowed to include a flight deck to receive a BELL 412 EP helicopter, complying with the regulations for this type of operations.

This design was developed based on the design spiral method, where each turn of the spiral includes estimates and performance calculations influenced by each other and corresponding to the different stages of the design. For this work, the conceptual design was divided into eight booklets containing the state of the art, mission profile, capacity sizing, naval architecture, propeller selection, generator selection, stability study and cost estimation, concluding in the feasibility of the design based on its cost at a conceptual level.

The Colombian Navy currently has four CPV coast patrol vessels and four Point Class vessels for coastguard operations, although those Point Class vessels have reached the end of their useful life and are in the process of being discharged. The Colombian Navy has found it necessary to have oceanic patrol vessels (OPVs) and even missile frigates for patrol operations in coastal areas, on sizing capacities for this type of operations and increasing their costs.

"Coastal patrol vessel" project (CPV) with flight deck for the reception and deployment of helicopters, mitigating the oversizing of units used by the Colombian Navy in coastguard operations, such as OPV or missile frigates, increasing the efficiency of these coastguard operations.

The type of descriptive research and the methodology of the design spiral has been highlighted, resulting in a cyclical and iterative method, in which each of the project phases is related to each other, establishing a relationship in each phase of the project. phases, this results in that the concepts and the results in each phase must be verified several times until they adapt to the considerations that keep the phases to each other. In this work a first spin of the spiral is done, which defines a conceptual level of the vessel.

This design was adjusted in compliance with the design standards of the Lloyd's Register Classification Society, in addition to complying with the regulations that regulate nationally and internationally the transit and safety of ships, such as the IMO or MARPOL norms, and the local regulations of the maritime authority DIMAR.

The main restriction of this design falls on the ship's beam, which is wide enough to meet the Lloyd's Register standards for flight decks according to the helicopter it will receive. The rotary wing aircraft with which the Colombian Navy has, consist mainly of Bell 412 EP helicopter, so this design was adjusted so that the flight deck can receive this type of aircraft without problems.

The coastal patrol vessel should serve as a platform to develop operations of "maritime interdiction, patrolling and surveillance of maritime spaces, and provide support in border control operations to detect, intercept, stop, board, visit and inspect vessels, supply of rapid reaction units, as well as the deployment, taking and supply of boats for visitation and interdiction, "in addition to providing assistance to vessels and people in shipwreck or state of emergency, as required by international conventions (Defensa.com, 2014).

Main Capabilities of the Design

In this paper, the capacities with which coastal patrol vessel designed and built in Cotecmar (CPV-46) are currently being considered and adjusted, adding the capacities required to receive and deploy a helicopter.

The scope of this conceptual design results in 2000 miles at 12 knots of speed, with a food and water autonomy of 17 days for 23 people.

Through the MaxSurf Modeler computational tool, a computational model of the CPV hull with flight deck is developed, obtaining the next forms:

Table 1. Dimensions and general characteristics of this design. By means of the computer tool MaxSurf Resistance, the resistance to advance of the computational model of the hull between 6 and 19 knots is estimated, obtaining the results shown in Table 2. From the result presented in the previous table, the 15% resistance of appendices that we assume has this design is added resulting in a resistance of 216, 66 KN for 19 Knots of speed.

The effective power (PE) is the result from multiplication the resistance estimated in KN by the speed in m/s, from here the brake power (PB) required by the propulsion engines is estimated, resulting from a margin of 90% aging and a propulsive efficiency assumed in 60% of the effective power (PE), as shown in Table 3. 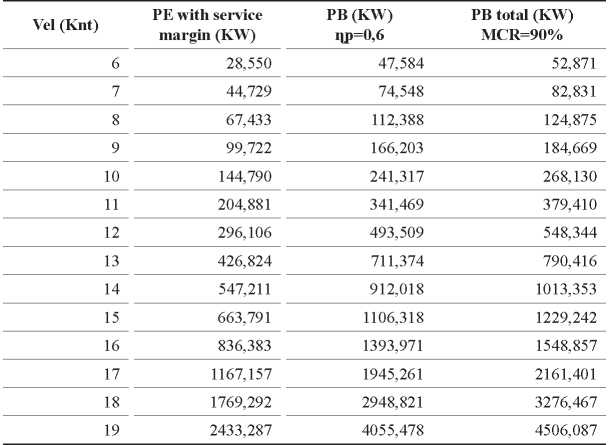 Knowing the fuel and lubricant consumption of the propulsion engines and generators, the tank capacity is estimated considering the reach of 2000 nautical miles at 12 Kn and the autonomy of 17 days for 23 people, this taking into account the fact that Water and fuel pumps do not suck a remaining 10% of the tanks and the tanks are not filled to more than 95% to prevent them from overflowing. Estimate the minimum tank capacity resulting in the next table.

Table 4. Minimum capacity of tanks of this design.

From the previous information, the tanks are dimensioned with the MaxSurf Stability computational tool, resulting in the next distribution of tanks:

Table 5. Tank capacity of this design

This design used the cubic number (NC) method, which maintains a ratio of length x breadth x depth between two vessels, keeping a real reference to develop the estimate of a design. Knowing the dimensions and loads of the CPV-46, the study of weight in the condition of displacement light ship or also known as thread weight was developed, estimating the load distribution and center of gravity of this design (CPV-49), with a margin of error of 3% in this displacement condition, resulting in what is presented in Table 6. Table 7. Deadweight distribution of this design. For this design the stability study was developed for three (03) loading conditions, maximum displacement, half load and light ship, by means of the MaxSurf Stability computational tool, these load conditions were simulated, obtaining positive results in the required criteria. by the IMO stipulated in chapter three of resolution A 749 "Intact stability without damage code ", which apply to vessels over 24 meters in length.

This design was developed following the rule of Lloyd's Register, "Rules and Regulations for classification of Naval Ship" of 2018, where it is established as an initial step to determine the type of vessel that is being designed according to the standard, as a result this category was categorized. design as a NS3 type, this category covers ships with less than 1500 tons displacement and with frontline roles that can operate individually or in a group of operations, corresponding to ships for mine sweeping, landing on beaches, coastal defense or fast patrol boat.

The construction materials were selected for this design, taking as reference the materials used in the CPV-46.

For the NS3 category certain guidelines are preserved for the development of the estimation and calculation of the scantling, such as the minimum plate thicknesses and the moments of inertia of the structural reinforcements, resulting in the following master frame. The module of section of the master frame was estimated and compared with the minimum of module section that according to the International Association Classification Society (IACS) (Avila, 2018) for the dimensions of this design, resulting in the following.

We estimate the maximum bending moment that the master frame supports according to its section modulus and the creep stress of the construction material (Mmax = Z*σ0), resulting in Mmax = 90027 KN*m. According to the previous results, we can conclude that the master frame complies with the capabilities to withstand the ship's loads at sea.

Vertical Speeds on the Flight Deck

According to the Lloyd's Register standard, the maximum permissible vertical speeds for a flight deck in a design according to the state of the sea at the Douglas scale are in the next table: With the Maxsurf Motion computational tool (Bentley Engineering), the sea behavior of the computational model of this design was simulated, according to the Douglas scale, these simulations were developed for a sea 4 and a sea 5 for the Caribbean Sea region, with a modal period and a height of the wave as presented in the next table:

According to the results of this simulation of the computational model, it is observed that the Lloyd's Register standard is satisfactorily fulfilled, as presented in the next table.

During the development of this design, the proposed objectives were achieved through the phases mentioned in the research methodology.

It was determined that the minimum length to include in the design of the CPV-46 a flight deck, is 49 meters according to the "Rules and Regulations for the classification of Naval Ship" standard of the Lloyd's Register Classification Society, in addition to reduce the maximum speed from 20 Knots to 19 Knots, because it would require that each propeller engine had more than 1300 KW of power to be able to achieve that single knot of difference, increasing much more the maximum displacement and the need for tank capacity made out of fuel.

During the development of this design, it was observed that for a breadth of 7.5 meters (initial breadth with which this design was estimated) favorable results were not obtained in their transverse stability, for which an 8 meter breadth was determined to counteract this situation, offering favorable results in the study of stability.