The average cocaine seizure rate of coast guard operations in the Colombian Pacific can be improved. To enhance this indicator, detection and interdiction must be improved. Therefore, the option of using an offshore platform with better detection means, and several Rapid Reasponse Units (RRUs) stationed offshore, is being analyzed. As a result, offshore platforms are neither feasible nor viable due to the depth of the sea floor (> 2 km), but SWATH platforms can be used. The parametric design of two SWATHs is performed and an operational evaluation is made of the different current units and SWATHs. The operational evaluation of the different current units and the proposed SWATHs is carried out and contrasted with their acquisition and life cycle cost, showing that the SWATHs have a better efficiency/ cost ratio. Therefore, they can be considered as an alternative to improve the efficiency of cocaine seizures and other coast guard operations.

The Colombian Pacific comprises a maritime jurisdictional area of 359,948 km2 and a coastline of 1589 km, which corresponds to 36% of the Colombian maritime territory (Comision Colombiana del Oceano, s.f.) . Due to the particular conditions of the area, there are a large number of events related to drug trafficking in the country.

According to statistics from the Anti-Drug Directorate and contrasted with other sources, total drug seizures are in the order of 40% of the total produced. (Revista Dinero, 2017), so there is great potential to improve the operational method in the Colombian Pacific with means that have better interdiction detection capabilities.

The impact of drug seizures for the Colombian Navy (ARC), in the maritime phase is enhanced by the "RED NAVAL" strategy through operations carried out by units of the Pacific Naval Force. However, due to limitations in autonomy, fuel capacity, time spent at sea and support capabilities of the floating platform, some areas are left uncovered and are used by drug dealers to launch semi-submersibles or "GO FAST" type boats. They also saturate the available resources by sending several boats loaded with narcotics, where there is usually only one RRU to carry out the interdiction and legalization of seizures.

The effectiveness of the larger units used as platforms is not the most adequate for coast guard operations such as maritime interdiction, since their design is optimized for other types of naval operations. For example, in the case of the Coastal Patrol Vessel (CPV), it does not have the capacity to receive helicopters, or to launch and capture an aerial drone (Unmanned Aerial Vehicle- UAV). In addition, it requires pairing with a RRU to perform interdiction, but it does not have the capacity to carry a large RRU on board and must alongside or tug generating a great material wear to them. The Amphibious Landing Craft (BDA), despite having the capacity to carry an Apostle boat, does not have the capacity to make offshore movements due to its design as a landing craft, and in the case of the Offshore Patrol Vessel OPV) and the ARC Valle del Cauca, they are vessels with helicopter capability, easy offshore operation but high operation and maintenance costs. According to the above, it is necessary to evaluate the effectiveness of the strategy currently used in the Colombian Pacific in an integral manner, comparing the efficiency of each unit with its cost. For this purpose, operational factors for the development of coast guard operations were determined with a committee of experts and by means of an Overall Measure of Effectiveness OMOE) methodology, the different existing platforms and a new proposal were analyzed. Initially, an application is developed in Visual Basic for VBA Applications language to show the distances from each point of the jurisdiction to the nearest coast guard station. The result is shown in Fig. 2. 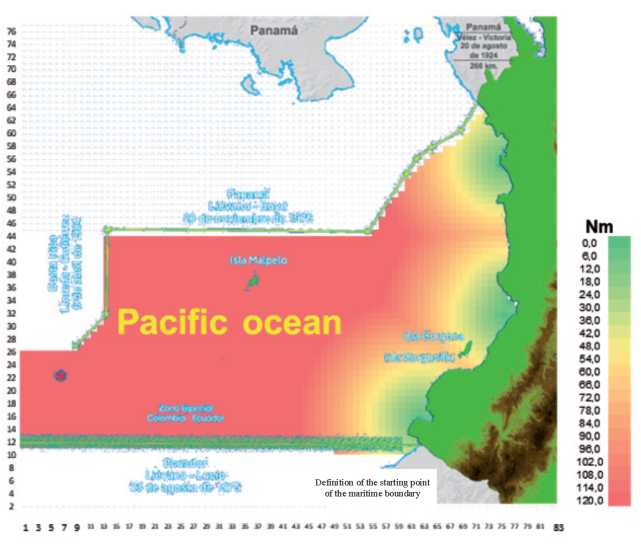 Fig. 4 shows the morphology of the probabilities of interdiction, by locating a platform or floating unit in an optimized position, having an oval shape with a greater probability of interdiction to the east, since the traces or routes of the units to be intercepted are directed towards the west. Likewise, greater dispersion is generated as it moves away from the platform, since with a minimum course variation it can move away from the platform much more, thus the RRU must spend a greater percentage of fuel from its tank to intercept it.

Fig. 4. Probability of interdiction from the coastguard bases and one naval platform Analyzing the operational area of the Pacific Ocean, and its prevailing depths, the area where Jack Up type platforms could be installed (up to 20 meters deep), do not exceed 10 nautical miles (Nm) and in some cases, it is less than half a mile as shown in Figure 5. The next area where platforms with expensive anchoring systems could eventually be installed would be up to 200 meters deep. In the Pacific, the average is 19 Nm offshore, with some places at less than 2 Nm. It is worth noting that the cost of moving the platform in this area of 20 to 200 meters is high, having to hire offshore service vessels (Offshore Service Vessel - OSV) with high capacity winches, thus losing the strategic advantage of the surprise of platforms or vessels that can move easily.

Therefore, the use of offshore platforms for coast guard in the Colombian Pacific is considered neither feasible nor viable. However, the use of Small Water Area Twin Hull (SWATH) type platforms will be analyzed due to their combination of characteristics as a platform having a wide cargo area capacity, in addition to an excellent behavior at sea, and having its own propulsion capacity. The following operational evaluation criteria will be established to compare current solutions or vessels with possible SWATH platforms. A proposal for the evaluation of each of the attributes was also made, which was validated and adjusted by the expert committee that accompanied this research.

In order to make a final assessment, a weighting must be given to each of the attributes listed above, considering those with greater relevance in fulfilling the different types of coast guard missions. For this purpose, a weighting exercise was done, according to the matrix methodology, confronting the elements one by one, and indicating their relative importance. The final result is shown in Table 2. SWATH platforms are considered to have high potential for the Pacific Coast Guard, due to features such as a large deck area and the ability to carry motion by up to six times compared to a monohull multiple RRUs, and a design that reduces wave of equal displacement. (Collins, Clynch, & Rago, 2005). This allows the RRUs to be safely maneuvered by crane in heavy seas, while offering personnel improved comfort during extended operations.

A parametric design of two SWATH type vessels was developed, based on the methodology proposed by (Bondarenko, Boiko, & Seropyan, 2013) (Bondenko, Boiko, & Boikoyan, 2013), and considering the requirements established in Table 3, aiming to generate units with high performance for coast guard operations according to the OMOE criteria evaluations defined in section 3.2. The result of the design is shown in Table 4 with the main dimensions and characteristics, as well as some ambiance renders shown in Fig. 6 to Fig. 8. Subsequently, the OMOE model was applied to the most common current platforms and to the proposed SWATH alternatives, obtaining the results shown in Table 5.

Subsequently, the OMOE model was applied to the most common current platforms and to the proposed SWATH alternatives, obtaining the results shown in Table 5.

From this result it is evident that the platforms with the best performance for these missions are the SWATH and OPV type platforms. OPVs are the largest and most capable coast guard vessels, hence their high operational performance. SWATH platforms have a higher performance since only the effectiveness for coast guard operations is being evaluated and having more RRUs and UAVs gives them a better rating. In other words, SWATH platforms have been specially designed for coast guard operations, but they cannot perform other missions which the OPV can perform, such as Antarctic missions, coastal bombardment or sovereignty control.

A life cycle cost assessment exercise was also carried out for the vessels, seeking to carry out a comprehensive analysis of their effectiveness and cost, in order to have a better view of the decision making process at the time of acquiring a new platform. For this purpose, an operational profile of 60 outstanding days and 5 days of provisioning was considered, plus a minimum repositioning navigation, projected to 30 years. The results are shown in Fig. 9. Finally, the OMOE operational efficiency is plotted for its acquisition cost (Fig. 10) to compare the different platforms in terms of their operational performance but also considering their cost.

This figure shows that SWATH platforms have a better relationship between acquisition cost and performance for coast guard operations than other platforms. However, the economic feasibility analysis should not be done with the acquisition cost alone but with its life cycle cost in order to make a better decision. Therefore, Fig. 11 shows the comparison of life cycle cost and operational performance.

Thus, it is clear that SWATH platforms prove a much higher ratio between their life cycle cost and operational performance for Coast Guard operations. This indicates that they are a feasible alternative to implement in the operational strategy in the Pacific, with a very important potential to increase the operational performance and therefore, the percentage of cocaine seizures with respect to what is produced, affecting the illegal groups that are financed by this illicit business more forcefully.

Although these results are derived from an initial parametric design, and therefore have a high uncertainty in their actual cost and characteristics, this is a starting point with considerable application potential due to its excellent results.

The maritime control strategy adopted by the Pacific Coast Guard has been continuously evolving and improving. However, there is still a wide road to improve on the 40% effectiveness indicator in terms of cocaine seized in interdiction operations.

Expanding the current strategy may be an effective alternative as has already been proven, but at a high economic cost due to the fact that the platforms used have not been specifically optimized for this type of operations.

The use of offshore platforms as traditionally used by the oil industry is not applicable for the Colombian Pacific, because it presents a submarine cliff leading to an average depth of 2000 to 3000 meters suddenly. The areas of less than 200 meters depth are less than 19Nm from the coast on average, which does not allow to deploy an effective offshore control and take advantage of the position as an operational advantage.

SWATH platforms are a technically feasible alternative, since their characteristics, such as their wide deck space, allow them to carry more RRU than a monohull of the same displacement, and their behavior at sea (seakeeping) is notably better, producing movements up to 6 times less than those of a monohull under the same wave conditions.

In the comprehensive performance and cost evaluation, the SWATH platform has a great potential by showing a similar performance to platforms that are twice as expensive in terms of acquisition and life cycle. These higher priced platforms, such as OPVs, have many other characteristics such as participation in international and Antarctic missions, AAW capabilities and others, but they are not suitable for the development of daily Coast Guard operations and therefore are not evaluated in this assessment.

Continue with the unit acquisition cycle, in parallel to a more detailed design phase, is recommended in order to improve the cost estimation and to be able to perform a more detailed analysis.

BONDARENKO, O., BOIKO, A., & SEROPYAN, I. (2013). Determination of the main characteristics of the small waterplane area twin hull ships at the initial stage of design. Polish Maritime Research, 11-22.