In recent year, considerable efforts have been made to improve the propulsive efficiency of the propeller on the ships. One of these propulsors is called a ducted propeller found as widespread application. The duct is generally used to obtain augment thrust, but it is also used to minimize cavitation and underwater noise or to protect the propeller from damage. There are two types of duct, the first type is called an acceleration duct or Kort nozzle and the second type is a deceleration duct. Fig. 1 shows both types of the ducted propeller. The Acceleration duct has a flat surface on the outside of the curve in the inner area. The outer surface is high-pressure surface and the inner surface is low-pressure surface (or suction). The suction allows more current to be directed into the duct and thus increase the flow rate. The increased inflow velocity causes a decrease in the thrust and torque of the propeller. At the same time, a circulation develops around the duct section resulting in an inward directed force which has a forward component, the duct thrust. The duct also has a drag directed aft. The efficiency of the ducted propeller is therefore greater than of the open propeller (Ghose, Kogarn, 2004). In recent years, computational fluid dynamics (CFD) have been extensively used for the analysis of marine propellers. Due to the complex shape, flow turbulence, flow separation and the possibility of cavitation, the analysis of marine propellers is a difficult task; however, some works have been done in the field of ducted propellers. For example, (Taketani et al., 2009) presented the advanced design method of a ducted propeller which has high bollard pull performance. A nozzle section shape and a propeller have been designed according to a parametric study of the numerical simulation in order to have higher performance than a conventional ducted propeller. The optimum arrangement between nozzle and propeller combination is also studied. The open water tests are carried out in a towing tank of Akishima Laboratories. (Tadeusz et al., 2009) have completed the design for ducted propellers using the new computer systems. In this paper, the performance of the five different ducts are compared and the result show that in most cases only the 19A duct was considered, and that this duct was designed for low speed and high bollard pull conditions. (Celik et al., 2010, 2011) presented a design methodology for the operation of ducted propellers in a non-uniform wake field. They also presented an investigation of optimum duct geometry for a passenger ferry. The numerical effect of duct shape on the propeller performance was presented by (Caldas et al., 2010).

(Baltazar et al., 2012) predicted the thrust and torque of a ducted propeller using a panel method to improve the accuracy of the calculated shape of wake panels and the flow behavior in the tip gap region. The numerical analysis employed to the ducted propeller performance under open water test condition (Yu et al., 2013). They also investigated the open water performance of the Ka-series propellers at various pitch and expanded area ratios in combination with the 19A duct by employing the panel method PAN-MARE and the RANSE code ANSYS-CFX. (Krzysztof et al., 2014) presented four diff erent geometries ducts to get better thrust characteristics in medium and high advance velocity ratio. (Xueming et al., 2015) analyzed the hydrodynamic performance of the ducted propeller by different turbulent models. They presented the pressure distribution on the propeller surfaces, the pressure and the velocity vector distribution of the flow field around the ducted propeller. They showed that the Reynolds stress model (RSM) is better that the k-ε standard model.

Various studies have been done on a ducted propeller, but analyzing a ducted propeller by using different turbulence models and comparing them with each other, studying the effects of propeller position along the duct and duct angle relative to propeller on hydrodynamic characteristics have not been studied. In this paper, a Kaplan propeller with a 19A duct is used for CFD analysis. First, 19A duct data, especially data on the beginning and end of the duct which do not find in any references, are provided to model the duct geometry. Then, the ducted propeller is analyzed by using three different turbulence models including k-ε standard, k-ω SST and RSM and the results are compared with experimental data. Furthermore, the effects of the propeller position along the duct on hydrodynamic characteristics are investigated and the position in which the maximum thrust is produced will be determined. Finally, the effects of duct angle relative to propeller on hydrodynamic characteristics are studied.

In the present study, it is assumed that the fluid is incompressible. The governing equations consist of the mass and momentum conservations. Using the Reynolds averaging approach, the Navier—Stokes equations can be stated as:

is the Reynolds stresses.

In many important engineering flows, we deal with rotating or swivel flows. Rotating flows occur in turbo machinery, mixing tanks, marine propellers and a variety of other systems. Equations (1) and (2) are solved in a stationary coordinate system but sometimes it is useful to be solved in a moving coordinate system. When we are looking at moving parts from the stationary coordinate system, the flow zones result in a stability problem, but with a choice of rotating reference frame around the moving parts, the stability problem is solved. For simple problems, if we do not have any stationary zone, the single rotating reference frame (SRF) method can be used. For complex geometries, using the SRF is not possible. In this case, the problem is divided into several zones and two methods of MPM and MRF can be applied. The MPM method, despite being more accurate, due to the inclusion of interactions between the stationary and moving zones, requires a high computational time. In this paper, the MRF method is used, because not only does it need low computational time but it also has acceptable accuracy levels. 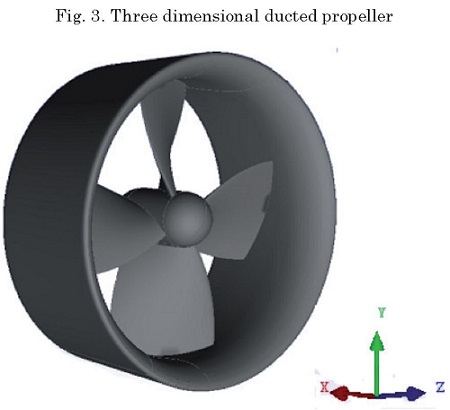 The computational domain is required to be discretized to convert the partial differential equations into a series of algebraic equations. The ICEM software is used for mesh generation. Fig. 4 shows the computational domain of the ducted propeller. The upstream part is considered to be 3D (where D is diameter of the propeller) from the mid-point of the chord of the root section. The downstream part is considered at a distance of 6D. In radial direction, the domain is considered at a distance of 1.5D from the axis of the hub.

The method of tetra/mixed type is used for mesh generation in ICEM software. The maximum size of mesh elements is 0.2 and to make better meshing in the curved parts (such as the leading edge) it is necessary to enable curvature/proximity based refinement option and to set the minimum size limit at 0.00175. The blade section is an airfoil with a sharp edge so in order to preserve the airfoil form after the mesh generation, it is necessary to set the edge criterion value in the volume meshing parameters tab to 0.08. The split wall option of a rotating zone in the partial mesh setup should be checked to create an interface between the rotating and stationary zones.

We used the MRF method which means that the computational domain is divided into two zones. The zone around the propeller is a rotational area and the other is a stationary area. The velocity inlet is changed to find the different advance coefficient. The inflow and outflow boundaries were set to velocity inlet and pressure outlet boundary conditions, respectively. The far field boundary was taken as the wall. The boundary conditions are shown in Fig. 5.

Calculations are carried out by the “Fluent software” to solve the three-dimensional viscous incompressible flow. The steady state pressure-based solver in a segregated mode was implemented using the MRF technique.

To find a proper turbulence model, the k-ε standard model, which has been used in most articles for ducted propeller analysis, is applied first. Then the results of this model are validated against the experimental results. In the next stage, the k-ω SST and RSM turbulence models are used and the results of these three models are compared. As a result of this comparison, the k-ω SST turbulence model is used as an appropriate model for investigating the effects of propeller position along the duct and also the effects of duct angle relative to propeller on hydrodynamic characteristics.

Independence of the mesh

Assuming constant rotational speed, advance velocity is changed until the advance coefficient of 0 to 1 is found and then, the hydrodynamic characteristics (KT, Kq, q ) are calculated.

Other turbulent models like the k-ω SST, k-ε standard and RSM are also employed. Table 3 compares the relative error of calculated efficiency with experimental data for three turbulent models. As can be seen, the relative error for RSM model is smaller than the two other models. The maximum relative error is less than 6%. The k-ω SST model is better than k-e standard model. The y+ value for all models is less than 30. It should be mentioned that very fine meshes are needed near the blades to achieve the less y+. Effect of the propeller location

Here, the propeller is moved to the outlet direction as a percent of the duct length (LD%). The results of the thrust and torque are determined at various locations (0<LD%<7%). The thrust, torque and the percentage of the thrust is shown in Table 4. It is concluded that when LD is 3% the thrust increases about 2.148%. For other advance coefficients (when the LD% is 3), the results are given in Table 5. When the advance coefficient is 0.797 the efficiency is increased by approximately 1.05%. In this study, a Kaplan propeller with 19A duct was numerically analyzed using RANS solver. Three turbulent models were studied, and the effect of propeller location and duct angles were investigated. Based on the results, the following conclusions may be drawn: