In the present study, numerical resistance predictions using OpenFOAM were performed considering the Cormorant Evolution Catamaran, which provides travel services in the Galapagos Islands. These predictions were compared with experimental data published by Chávez and Lucín [1] and with systematic series [2]. Simulations were made at model scale of 2 [m] in two load conditions, considering demi and twin hull (s=0.56 [m]) configurations. A mesh convergence study was performed with 3 different meshes for V=1.05 [m/s] at Light Condition (T=0.086 [m]). The converged mesh, with 1 million of cells approximately, has the lower standard deviation and a 5% error when compared to its experimental value of 1.79 [N]. The errors between the experimental data and the numerical simulations for demi hull configuration were 43% and 36% for Light and Full conditions, respectively. Besides, for twin hull configuration the errors were around 14% and 32% for Light and Full conditions, respectively.

The resistance of a ship at a given speed is the force required to tow the ship at that speed in calm water, assuming no interference from the towing ship [3]. The ship must provide the minimum shaft horsepower to cruise at required velocity.

Ship resistance estimation is a complex task. It can be broken down into frictional and residual components. In addition, there is an additional component in the case of catamarans, such as the interference between the demi-hulls. There are three different methods to predict ship resistance: empirical methods, model testing and numerical simulations.

In the last years, numerical simulations using CFD have become a third alternative used in the industry. The CFD solution is a numerical method to solve the nonlinear differential equations governing the fluid flow. However, it cannot be used as a black box because it can produce spurious results if not set correctly. It is required to perform a verification and validation procedure, usually using experimental data.

In this work, numerical simulations were performed to predict total resistance of a catamaran and results were validated using experimental data obtained by Chávez and Lucín [1]. OpenFOAM is used to predict the catamaran resistance. It was chosen because of its customization options, online training and support, and it is open source.

The “Cormorant Evolution” Catamaran was built in Ecuador in 2011 by “Astilleros y Marina BOTTO CIA. LTDA”, and operates through “Cormorant Cruise” in Galapagos Islands [4]. It is a 32.5 [m] length fiberglass touristic vessel; with a “V” middle section, a bulbous bow, separation of 9.11[m] between the centerlines of hulls and a design velocity of 5.14 meters per second (10 knots). Subsequently a 2 [m] length model was built using Cormorant Evolution hull-shape, to measure experimental resistance in the lake of “Escuela Superior Politécnica del Litoral” (ESPOL) [1]. The scale factor was 2=16.25- The experiment velocity range of the model was from 1.05 to 1.45 meter per second. Table 1 shows the main characteristics of the catamaran at two load conditions. scripts, called applications that are divided in two categories: solvers developed for specific problems in continuum mechanics, and utilities developed to manipulate data. Fig. 2 shows the workflow of OpenFOAM.

There are three physical laws that govern a fluid flow: Conservation of Mass, Conservation of momentum, and Newton's Second Law. However, these equations cannot be solved analytically for all types of problems.

One alternative is to solve them numerically using Computational Fluid Dynamics (CFD). In real applications, fluids flow is turbulent and it can be modeled by R ANS technique. The governing equations are: The following assumptions about the numerical model to be implemented are considered:

For marine applications, two solvers can be used for multiphase flows, interFoam and interDyFoam. In this thesis, the InterFoam solver is applied because only ship resistances are measured in experiments. InterFoam is a solver for two incompressible, isothermal immiscible fluids using a volume of fluid phase-fraction based interface capturing approach [8]. The computational domain includes fresh water and atmosphere.

y+ is the non dimensional distance and OpenFOAM is a post processing tool applied to near-wall cells of all wall patches. The value obtained by y+ can describe the places where the mesh has to have a greater number of cells. y+ is defined by:

Design (CAD) software Rhinoceros 3D [5] and positioned after the perpendicular line at the origin axes before exporting as a STL file to import into the CFD code, OpenFOAM. Fig. 3 shows the 3D R hinoceros scaled demi-hull model.

The computational domain was built as a rectangular block around the hull (demi and twin hulls) in deep water; Fig. 4 shows the principal dimensions in meters. To identify the mesh density needed for the Catamaran cases a mesh convergence study was perform. The domain was divided into six blocks with different mesh densities. Table 2 shows the number of cells for each mesh.

To visualize the convergence of the simulations, Fig. 5 shows the force time history (4,000 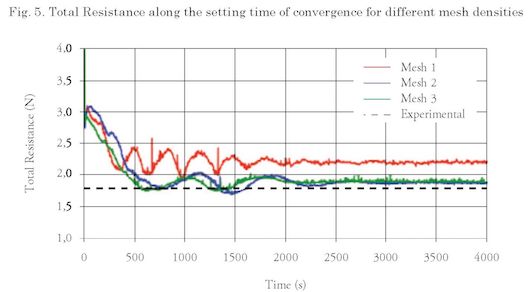 seconds — Fixed time step 1 per second) for each mesh.

Four thousand values of resistance were generated at the Light Load condition at v=1.05 [m/s]. Table 3 shows the average of the last five hundred values for the resistance of each mesh and its error when compared with an experimental value of Rtexp=1.79 [N]. The errors between meshes 2 and 3 are closer. But, analyzing the standard deviation, Mesh 2 has less variation of resistance in the analyzed steps. Mesh 2 was selected to set up the other simulations. Fig. 6 represent the mesh 2 configuration around the hull. As a post-processing tool, y+, was calculated to verify the mesh quality near the hull. A value of y+ <100 is acceptable for the case of the catamaran. Fig. 7 shows the wall y+ parameter for the submerged hull.

Bow, Stern and central keel are zones that required a grater mesh density. Total resistance was obtained by adding pressure and viscous forces.

Table 4 and 5 present the data obtained by OpenFOAM simulations at different velocities in two Load Conditions. The percentage of standard deviation was obtained by [1]: Figs. 9 and 10 shows the total resistance by OpenFOA M, experimental data and Maxsurf for demi hull. The simulation standard deviation it's about 0.63%, due this cannot be displayed.

The model was simulated following the experimental data [1], and compared with Maxsurf-Resistance. To simulate the catamaran structure in OpenFOAM, the hull was displaced into the computational domain a distance S=0.2805 [m], measured from the centerline of ship to centerline of the hull, Fig. 11 shows the distribution. Table 6 and 7 present the data obtained by OpenFOAM simulations at different velocities in two Load Conditions. Figs. 12 and 13 shows the total resistance by OpenFOAM, experimental data and Maxsurf for demi hull.

The errors between experimental data and numerical simulations are lower in light condition of catamaran. However none of the curves follows the same trend. The catamaran interference was estimated following the expression [1]: Figs. 15 and 16 shows the interference factor for original hull separation at Light and Full load conditions.

The interference factor obtained by numerical simulations is linear contrasting with the experimental interference published by Chávez and Lucín [1]. The positive interference corresponds to increased interference (unfavorable) and the negative values to decrease (favorable).

The blue areas correspond to the hollow of the wave and the red areas to the hump. Of these three figures it is emphasized that as the speed of the simulation increases the amplitude and the length of the wave increase. Also, the wakes pattern from the lowest to the highest velocity produce the increase in zone of interference.

Before starting the Catamaran numerical resistance, several tutorials were carried out using the OpenFOAM user manual [6]. These tutorials were of great help to understand the capabilities and limitations of the software. Cavity was the first made tutorial, for laminar and incompressible flows. The user manual gives an overview of the workflow of OpenFOAM: Pre-processing, solution and Post-processing. ParaView is a post-processing tool; the user manual also gives an introduction of its operation. This was an important step for understanding OpenFOAM and the principles of fluid analysis.

Numerical simulations using OpenFOA M are a feasible method for predicting the resistance of the Cormorant Evolution catamaran, despite the difference between experimental data and numerical simulation resistance. However, numerical results are close to statistical methods, such as Holtrop and Molland, estimated with Maxsurf Resistance software.

These variations between experimental results and numerical simulations may be due to external factors, that can not be controlled or measured, such as: wind, water temperature, interference between the method of drag, towing velocity uncertainly, differences between the model and the catamaran, and range of work of Data Card available in our college.