Structural Design of a Jacket Platform to the Colombian Caribbean Sea

This research paper summarizes the study of the requirements and basic theoretical foundation for the development of structural design of fixed platform type Jacket, resulting in the proposal for a analysis model for this type of offshore structure. Aspects related with cinematics evaluation, selecting of wave theory and hydrodynamic proper formula are also considered in the calculation of acting forces and the need for local metocean data in the analysis. A case study of application of the model for a new type structure jacket RC-5 Block of the Colombian Caribbean is also presented including its geometry proposed and some results of the numerical model procedures.

A platform type Jacket is a structure placed on the ocean, built with steel tubular components and fixed at the bottom of the seabed with stakes, used for the exploration and specially for the production of hydrocarbons and mainly for depths of up to 300 meters. Structures that are exposed to the action of the waves, ocean currents, winds, earthquakes and other environmental aspects specific to the site operation and to be considered in the design.

Due to the large demand of hydrocarbons in the world, there is a need to explore new deposits in search for reserves, and consequently, its vast seas are becoming a promising frontier for exploration operations and a source of energy resources, projects known as offshore.

Colombia is not indifferent to these initiatives, since the 2007 Caribbean Round until the last 2014 Colombia Round, a total of 23 offshore contracts have been assigned, of which 21 are in the Colombian Caribbean sea, 13 of them are oriented to the exploration and production of hydrocarbons (ANH).

The main objective of this research paper is to propose a model of analysis in the design of a platform type Jacket offshore considering the characteristics and conditions of loads produced by the environmental effects of the Colombian Caribbean sea. Define the guidelines and basic theoretical foundations to follow in the analysis and design of these types of structures, determining the actions of the environmental loads specific to the region of operation. Establish the procedures and methodologies for analysis and their corresponding design and regulatory criteria for the structures type Jacket with a case study application for the Colombian Caribbean Sea.

There are various configurations for structural settings for the structures type Jacket depending on their installation and performance with respect to the environmental conditions and particularly to the seismic activities of a specific region, as shown in Fig. 1 [7]. From the point of view of the cinematics of water particles we have bidimensional models that work as a starting point for the estimation of the status of the sea based on the following classic theory of waves [5], among others:

Fig. 2 (figure 2.3.1-3 of section 2 of API RP2A-WSD), shows the regions of application of the theory of waves mentioned in the above list. The most widely used theory and because of its simplicity is the linear theory of Airy, given that the origin of his formula is based on the potential of speeds, which depend on the position of the particle in the fluid and the given t that is taken as a reference. See equation 1. The hydrodynamic forces on the structural elements due to the action of the waves can be estimated in three different forms [2]:

According to the foregoing, when a structural element has a small relationship between the significant length (being such length the diameter in the case of cylinders) and the length of the wave tide (according Fig. 3), said element does not significantly prevent the propagation of the incident wave, therefore, it is possible to use the Morison equation for the calculation of the hydrodynamic forces on slim cylinders. This is the case in the majority of steel platforms type Jacket, where the structural elements usually do not exceed two meter diameters, against wave lengths that are generally larger than one hundred meters in the design waves.

In the Morison Equation, equation 2, the acting force has two components participating simultaneously, the terms of inertia and drag. This calculation can be applied when the structure is small with respect to the length of the tide wave. [2].

Being that these are the main loads that determine the life cycle of a structure, the models and processes must be studied with detail to determine the limitations produced by each one considering the different codes that seek the design of an optimal structure for different environmental conditions.

In relation to the wind forces, the general expression is used for the calculation of said action over any structure located on the sea, represented by the equation 3. The value of the wind coefficient is represented by a factor of the form of the structure and the factor depending on the height of the affected part of the structure, according equation 4. 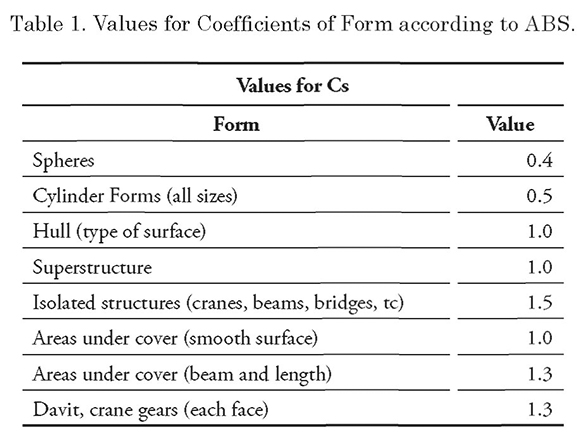 In the estimation of the loads by the presence of ocean currents, the classic expression of an immersed element of a floating structure is used, equation 5. The tubular components of the Offshore structures type Jacket are designed and verified against the admissible tensions and limit status in accordance with a series of codes applicable to the sector, mainly for these structures of the American Petroleum Institute (API). Codes that not only include resistance and functionality requirements, as well as additional structural behavior aspects plus complexes, such as hydrostatic collapse, punching sheer and resistance to damages from fatigue. The foregoing corresponds to one of the most relevant stages of the design process, providing a reasonable level of reliability during the life cycle provided for the structural components. The application of some codes in the design and checks towards the hydrocarbon sector in components of metallic structures as follows: Fig. 5 details the model of analysis for the structural design of platforms type Jacket applied to the Colombian Caribbean sea. Considering its location for operation, it is determined that the environmental characteristics corresponding to the adequate depth ranges for these types of structures. The dimensions and geometry, and structural arrangement of the unit, will likewise depend on the environmental conditions, seismic conditions of the seabed as well as on the capacities destined to exploration and/or production of the field, distance to land or exploration system selected.

In the evaluation of the hydrostatic and hydrodynamic loads it is necessary to select the adequate wave theory having previously studied the aspects related to the cinematics of particles.

They are likewise included as one of the most important stages of the process of application of design and check codes.

As application of the proposed methodology, a study case of structural design was carried out on a new platform to be located in block RC-5 of the Colombian Caribbean sea, Fig. 5. A structural arrangement type 3 is selected, Fig. 1, in accordance with the characteristics and environmental conditions, particularly low depth and minimum seismic activity in the region, wave characteristics represented in Table 3. In the calculation of the environmental loads and the analysis and check of the structural components, we relied on the GTSTRULD Y GTSELOS System [7], obtaining the permitted deformation results, Figure 6 and resistance, which were verified through standard API 2A-WSD. As shown in Fig. 7, no member exceeds the limit percentage of the load. of the loads with the structure, considering also the effects originated by the hydrostatic pressure (flydrostatic Collapse).

To verify the structural resistance of the elements, a review of the acting efforts is made in the structural elements according to the design standards and criteria, which for our case is APIWSD21, given that it is current in the database of the System used GTStrudl [7].

As there is a need for new discoveries, increase the reserves and the production in the Colombian Caribbean sea at depths up to 300 meters, an increasing development of the infrastructure in offshore platforms type jacket is expected. This research paper proposes a methodology of analysis and structural design considering the theoretical foundations and field information necessary to provide reliable systems type Jacket according to its functionality and the region of location. Information such as the environmental characteristics and the depth of the operating site, become necessary data to select the adequate theoretical foundation for the development of the analysis.

The model of analysis was applied for the design and analysis of a platform type Jacket according to the environmental conditions of Block RC-5 of the Colombian Caribbean sea, complying with the parameters permitted by the design standards for these types of structures. The presented methodology will make make the development of future works easier within the field of study of offshore engineering in the Colombian Caribbean region.